Researchers in Southeast Alaska have broken the record for the longest re-sighting of a humpback whale.

On July 12, researchers aboard a ship called the Northern Song spotted a humpback in Frederick Sound, Alaska. To the crews amazement, they soon recognised the humpback to be none other than a whale named ‘Old Timer’, an individual that has been renowned in the area since it was first photographed over 44 years ago.

Old Timer was originally sighted in Lynn Canal, southeast Alaska in 1971 by Charles Jurasz, a pioneer in whale research. At the time, Old Timer was already fully grown and he is believed to be at least 50 years old now. During the 1970s it was so rare to see a humpback whale in Frederick Sound, sightings were often dismissed as wild rumours, however the area is now abundant with humpbacks.

Adam Pack, a professor at the University of Hawaii who spotted Old Timer earlier this month, spoke to local radio station KFSK about the sighting:

“I was on the deck out here and Jim Nehmans, my colleague, was adjacent to me and then we saw this one fluke at the same time,” he said. “We just looked at each other and said ‘there’s Old Timer’ and we literally jumped up and high fived right there on the front of the boat.”

Whale individuals are usually identified by their tale flukes, which become briefly visible above the water surface as the whale dives. Many have such distinct patterns that individuals can be immediately recognised, as was the case with Old Timer. Old Timer’s fluke is black with white shading and the unique pattern can be seen below, practically unchanged, in images from the 1970s and current day. 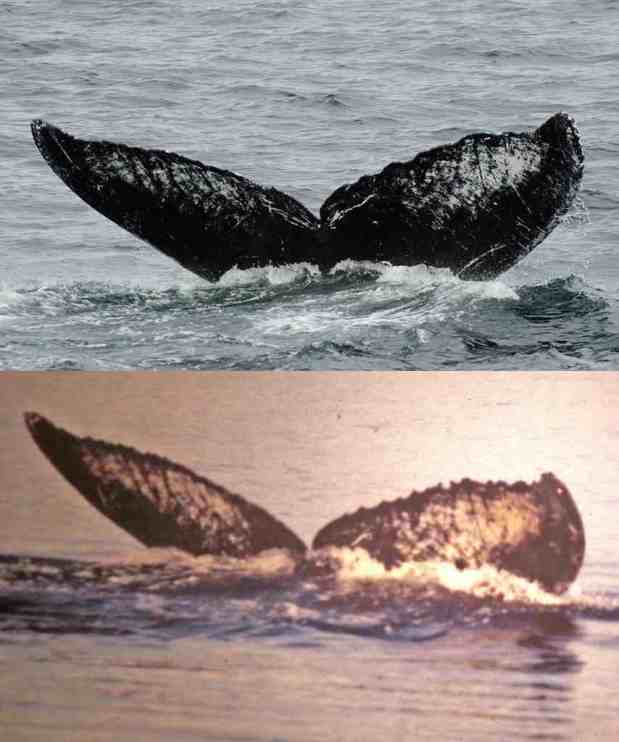 This sighting was the most recent of only a handful of sightings since the humpback was originally photographed in 1971. In 1990, Old Timer was spotted off the coast of Hawaii escorting a mother-calf pair, and was observed again in 2006, defending his position next to a lone female from other competing males. That sighting confirmed he was male, Dr. Pack said.

Dr. Pack goes on to say that the fact he gets to see these whales after 44 years is testament to the protection and conservation the species has been given since 1972: “It’s really a celebration of whales since humans largely have stopped hunting them,”.

It was in 1972 that the United Nations Conference on the Human Environment at Stockholm adopted a proposal that recommended a ten-year moratorium on commercial whaling to allow whale stocks to recover. The reports of the Convention on International Trade in Endangered Species in 1977 and 1981 identified many species of whales as being in danger of extinction. A number of non-whaling and anti-whaling states began to join the IWC and eventually gained a majority over the whaling nations. Some countries who were previously major whaling forces, like the United States, became strong proponents of the anti-whaling cause.

However, Dr. Pack says seeing whales like Old Timer again and re-listing can be celebrated but that doesn’t mean they can be complacent.

“It means we’ve done pretty good but we have to continue to be vigilant,” he said. “We have to make sure that they are there for generations to come.”