Due to the often unique structural and biochemical properties of seaweed, their utilisation by humans has occured for centuries. In modern times, the seaweed industry provides a wide range of products that are estimated to have a total annual value of US$5.5-6 billion, with food products for human consumption contributing to about US$ 5 billion of this amount 1.

The industry uses 8 million tonnes (wet weight) of seaweed annually, with seaweed being harvested either from naturally growing seaweed or from cultivated crops. Japan, China and North Korea are are the largest consumers of seaweed as food, however increasing demand has spread throughout the world, to the point where natural stocks can no longer supply the requirements of the food industry. This has led to the development of seaweed cultivation that now produces more than 90 percent of the market’s demand 1. Over  14.7 million tons of seaweed are commercially produced yearly, 6% collected from wild stock, 94% farmed. The seven top seaweed farming countries deliver 99.95% of the global farmed volume and are all situated within Asia, with China being the biggest producer (54%) 1.

The use of seaweed as a source of food has been occurring for centuries, most significantly in Asia. The earliest known uses of seaweed by humans was discovered through the identification of human artefacts at the early archaeological site of Monte Verde in southern Chile. Remains of nine species of marine algae were recovered from hearths at Monte Verde, and were directly dated between 14,220 and 13,980 years old and indicate that the site’s inhabitants used seaweed from distant beaches and estuarine environments for food and medicine. These findings also confirmed that seaweeds were important to the diet and health of early humans in the Americas and according to the earliest written records, seaweed was consumed in Japan during the Asukaand Nara Era approx. 1,500 years ago. Examples of seaweed currently consumed by humans as a food source include Nori, that refers to various edible seaweed species of the red alga Porphyra,  and Saccharina japonica (Laminariales). Laverbread, a traditional Welsh dish is comprised of the seaweed Porphyra dioica, which is boiled, minced and subsequently rolled in to oatmeal for consumption. The use of seaweed for medicinal purposes is popular in asia, with four groups of seaweeds commonly used. These are Laminaria (kelp) – a brown algae, Ecklonia (the more commonly used item) – a green algae as sources of kunbu (Laminaria is sometimes called haidai, to distinguish it from Ecklonia or other sources), Sargassum – a brown algae as the source of haizao and Pyrphora, a red algae, as the source of zicai. In addition to seaweed’s use as a source of food and medicine, it is commonly utilised in a variety of other applications including in the textile, pharmaceutical, cosmetic, and biotechnological industry.

There is a long history of coastal people using seaweeds, especially the large brown seaweeds, to fertilize land. Due to the high nutrient properties of certain seaweed species, the application of them in agriculture can result in the supply of nutrients essential to the growth of plants. Ascophyllum spp is often used as a soil conditioner in controlling losses of top soil. Ascophyllum contains alginate, a carbohydrate composed of long chains, which forms strong gels when calcium is added. By composting the dried, powdered Ascophyllum under controlled conditions, the alginate chains are broken into smaller chains and these chains form gels with calcium. The composted product is a dark brown, granular material containing 20-25 percent water and it can be easily stored and used in this form. Steep slopes are difficult to cultivate with conventional equipment and are likely to suffer soil loss by runoff. Spraying such slopes with composted Ascophyllum, means it holds any soil in place and retains enough moisture to allow the seeds to germinate. The spray is thixotropic, i.e. it is fluid when a force is applied to spread it but it sets to a weak gel when standing for a time and sticks to the sloping surface.  Plants quickly grow and topsoil forms after a few years.

The use of seaweeds in the textile industry is attributed to alginate, chain forming polysaccharides that are cell wall constituents of many species of brown algae. Alginate when isolated from seaweed, has remarkable water absorption properties which is useful in the production of paper and textiles. Due to these water absorbing properties it is also used in the fireproofing and waterproofing of various fabrics. Calcium alginate is insoluble in water and this led to the development of fibres that could be woven into various textiles or parts of textiles, and their use in bandages, particularly for large wounds and burns, became widespread. Through binding with water, Alginate forms a viscous gum which  is attributed to it’s extensive us as an impression-making material in dentistry, prosthetics and lifecasting. In 2009 production of alginates was 26,500 tonnes with a value of about US$318 million.

Agar, and its derivative agarose, comes from red algae belonging to the family Gelidiaceae. Agar is utilised primarily in Science, through use in laboratories. Specifically in molecular biology for the separation of large molecules, e.g  DNA, by electrophoresis. The properties that make agar useful in molecular biology are due to its broad range of physical, chemical and thermal stability, and its lower degree of chemical complexity also makes it less likely to interact with biomolecules. Carageenans are another linear polysaccharide, that are extracted from various species of red algae (e.g. Chondrus crispus) and are widely used for their gelling, thickenening and stabilising properties in the food industry. Here they are used primarily in dairy and meat products due to the polysaccharides’ strong binding ability to food proteins. Such polysaccharides derived from seaweed as so abundantly produced that it is likely  that one has eaten carrageenan or some other seaweed product in more than one product over the last 24 hours.

Gelidiaceae algae is used to produce agar, primarily used in the biological sciences

The biofiltration properties of seaweed has led to their utilisation in aquaculture. The term Integrated multitrophic aquaculture (IMTA) describes the co-culture of species for environmental and economic benefit. This system of aquaculture is achieved by cultivating species which are fed or intensively farmed (for example Atlantic salmon) alongside species whose culture results in nutrient (or energy) extraction (e.g marine algae). This process, when seaweed is involved, promotes economic and environmental sustainability by converting byproducts and uneaten feed from fed organisms into harvestable crops, thereby reducing eutrophication and increasing economic diversification. The cultivation of Gracilaria chilensis, a species of marine red algae, alongside (in the nearby vicinity of) atlantic salmon cages,  resulted in the algae removing large amounts of dissolved nitrogen and phosphorous wastes from salmon in the nearby cages, resulting in a 40% higher algal growth rate than in samples grown 150km from the salmon cages. This consumption of dissolved waste products by the algae results in increased algal abundance and thus increases the abundance of the seaweed to be sold for commercial use. This process also assists in preventing eutrophication to the surrounding marine environment.

This process of utilising seaweed in integrated aquaculture is not currently a vastly practiced method of aquaculture. Increased sustainability of both seaweed and farmed fish species could result from the increasing utilisation of this system, which could significantly increase  production in response to the increasing requirements of seaweed and fish for commercial processes. 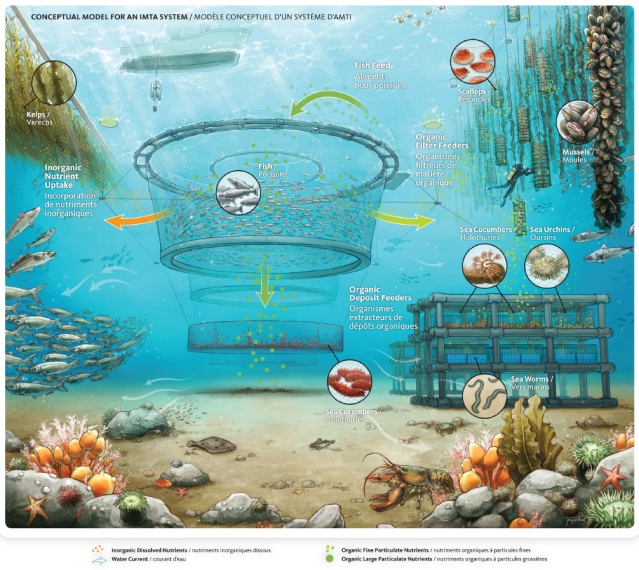 A conceptual model of an IMTA System – Credit: http://www.dfo-mpo.gc.ca/aquaculture/sci-res/imta-amti/imta-amti-eng.htm

The same process that allows seaweed to soak up nutrients makes it a viable method of extracting toxins from waste water—ammonia, ammonium, nitrate, nitrite, phosphate, iron, and copper can all be extracted from water supplies through the seaweed’s photosynthesis. Certain seaweeds also possess powerful cancer-fighting agents that researchers hope will eventually prove effective in the treatment of malignant tumors and leukemia in people (while dietary soy was long credited for the low rate of cancer in Japan, this indicator of robust health is now attributed to dietary seaweed).

It would seem the potential uses of seaweed species are endless and the industry is booming, with these versatile marine plants and algae continuing to contribute to a range of processes and aid in economic growth worldwide. The UK government has already recognized seaweed farming as a future energy source and studies has found that seaweed has potential to the primary energy provider for the entire world.  The only drawback to seaweed farming is the intense labor involved, which may be a barrier to scaling production until technology advances.

One thought on “Seaweed Aquaculture: A growing industry”