Increasing global temperatures due to climate change have resulted in increases in the severity and frequency of coral disease events around the globe. Coral species have faced rapid declines due to disease outbreaks, so understanding immune responses and associated potential life-history trade-offs is therefore a priority.

Researchers at The University of Texas at Arlington have found a correlation between a strong immune response in diseased corals and a lower expression of genes associated with growth and reproduction.

The research was published this month in Royal Society Open Science as “Transcriptional analyses provide new insight into the late-stage immune response of a diseased Caribbean coral.”

This novel disease that affects octocorals of the genus Eunicea was first documented in the Florida Keys in 2011. Termed Eunicea Black Disease (EBD), the disease is easily identified by the dark appearance of affected tissue, caused by a strong melanization response on the part of the host.

The diseased corals showed higher activity among groups of genes that work together around stimulus, immune response and biological adhesion processes, which are often involved in the moving of cells toward a diseased area for immune response. At the same time, there was a lowering of activity of genes associated with cell growth and cell maintenance.

“Potential trade-offs during infection may affect post-outbreak recovery of reef ecosystems by reducing growth and reproduction,” said Laura Mydlarz, UTA associate professor and associate chair of biology. “These findings highlight the importance of considering more than coral death in estimating the effects of disease outbreaks on ecosystems.” 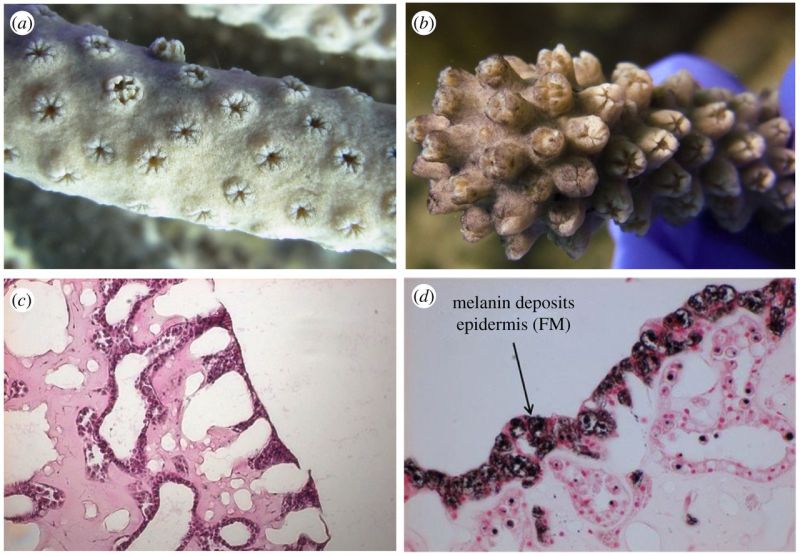 Macro and histological views of healthy (a,c) and diseased (b,d) Eunicea. (a) Close up of a healthy colony of Eunicea lacking any characteristic black pigmentation associated with the disease. (b) Close up of a colony of Eunicea infected with EBD; note the characteristic black pigmentation of the tissue. (c) Standard haematoxylin and eosin stained histology slides of apparently healthy sample showing good tissue organization and normal staining characteristics (pink staining) and (d) slides of tissue from an infected colony stained with Fontana-Masson showing the epidermis with melanin deposition.

“Our findings point to an ecologically relevant potential trade-off, and one which has important implications as we see more coral disease as a result of climate change,” Mydlarz said. “Resilience of species and coral communities may be affected if corals reduce cell growth and reproduction when actively fighting a disease.”

Future RNA analysis will be carried out at the new North Texas Genome Center housed on the UTA campus, which is bringing massive genome sequencing capabilities to North Texas to support the scientific, academic, medical and biotech communities.

“The North Texas Genome Center will be an invaluable resource for our research around coral immunity and genetic response to disease,” Mydlarz said. “Having a resource on campus with this capacity is a real game changer.”

“We plan to continue the analysis of these samples with an aim to increasing our ability to predict coral community trajectories under increasing pressure from disease and climate change.“