A study published in the journal Frontiers in Marine Science this week showcases the use of hormone analysis to provide a viable way of measuring the duration and effects of fishing gear entanglement on endangered North Atlantic right whales. This forensic technique for analyzing stress responses can also provide information on fasting periods and physical stress in whales.

North Atlantic right whales (Eubalaena glacialis) are a large baleen whale species with around only 450 individuals left in the world. Such a small population means the species is critically endangered. Right whales have occurred historically in all the world’s oceans from temperate to subpolar latitudes but they primarily occur in coastal or shelf waters, although movements over deep waters are known.

The species are severely impacted by fishing gear entanglements which continue to increase in frequency and severity, making them the leading human-caused injury and death to the species.

“At least 2% of the population died in the past year. Some of these mortalities were due to interactions with fishing gear, but most living North Atlantic right whales have been entangled at least once in their life,” says Dr Nadine Lysiak, lead author of the study from the University of Massachusetts Boston, USA. “Clearly, some whales are able to survive fishing gear entanglement, but this still affects their health and future reproduction — a serious concern for a species at risk of extinction.”

To better understand both the physiological response to entanglement, and to determine fundamental parameters such as acquisition, duration, and severity of entanglement, the team measured a suite of biogeochemical markers in the baleen of an adult female that died from a well-documented chronic entanglement in 2005.

“From previous sightings we had information on when it first became entangled in fishing gear and its general migration behavior,” says Lysiak. “We used this information to compare with the chemical analysis of the whale’s baleen plates to validate our results.“

Whale baleen, the bristly filter feeding mechanism in the mouths of some whales, was specifically chosen for tissue sampling as, much like that of the rings of a tree, it continually grows in seasonal variations throughout a whale’s life.

From the baleen tissue, the team analyzed specific hormones and stable isotopes which showed them changes to normal body functions in the whale. Elevations in steroid hormones indicated stress responses; thyroid hormones showed foraging success, energy expenditure and overall body condition through metabolic rate; and nitrogen and carbon isotopes showed annual fluctuations of seasonal diet and foraging location from which migration patterns could be determined.

“This gave us an 8-year chemical profile which we could use to understand how entanglement affected the whale’s foraging success, migration behavior and body functioning,” says Lysiak.

“Using the results, we determined that the whale was entangled for about 9 months and experienced severe, prolonged starvation prior to death. This was validated by previous sightings that the fishing gear was wrapped over the whale’s blowhole and tangled in its baleen plates, making it difficult to feed normally,” explains Lysiak. 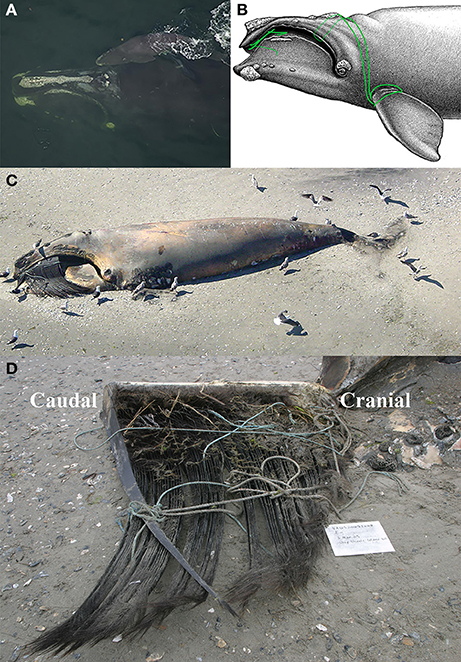 The team hope their findings will contribute to mitigating these interactions between human-caused impact and vulnerable whale species.

“Our work shows how fishing gear entanglement can affect whales and provides further evidence for the need to modify fishing gear and practices to minimize the threat of entanglement. We will be communicating our results to fishing industry leaders and the research community and hope our work will contribute to improving ongoing management efforts.“

This analysis technique could potentially also be applied to unstudied whales to establish how fishing gear entanglement affects them. However, the authors do stress the limitations of their paper.

“We only analyzed one individual, so further studies are necessary – and sadly, another animal needs to die for this,” says Lysiak. “Unfortunately for the North Atlantic right whale population this is a much too common event.“

Thousands of sea turtles being netted off South America every year