New research shows that tens of thousands of sea turtles are caught each year by small-scale fishers off South America’s Pacific coast.

The study, led by the University of Exeter and supported by the UK government’s Darwin Initiative, involved conducting surveys at 43 harbours in Ecuador, Peru and Chile, revealing that gillnet fisheries catch more than 46,000 sea turtles per year, with more than 16,000 killed in the process. The true numbers of turtle bycatch are likely to be higher, as not all ports in each country were surveyed.

Bycatch of marine megafauna by small-scale fisheries is of growing global concern. The southeastern Pacific sustains extensive fisheries that are important sources of food and employment for millions of people however the fishing methods used are often non-selective in what animals they catch.

Gillnetting is a common fishing method used by both industrial and small scale fishermen across the world’s oceans. Gillnets are vertical panels of netting normally set in a straight line deployed in the water column from a boat. When a fish swims into a net it usually passes only part way through the mesh and when it struggles to free itself, the twine slips behind the gill cover and prevents escape.

Gillnetting is deemed an indiscriminate form of fishing, in that these nets frequently snag bycatch, including sea turtles, seabirds, and elasmobranchs (sharks and rays). 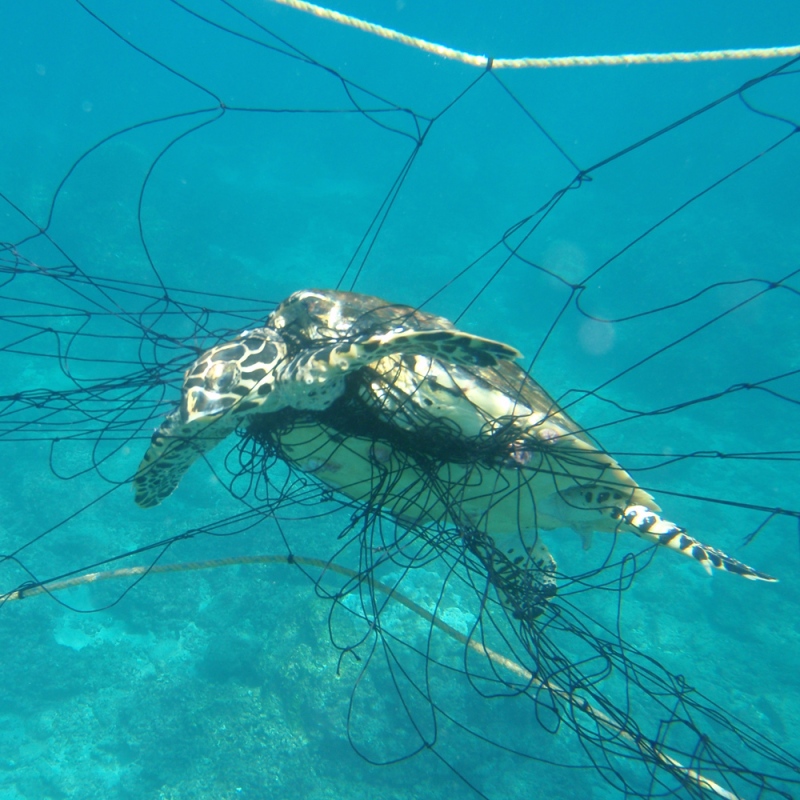 A Hawksbill sea turtle entangled in a gillnet

The team’s findings are truly worrying as the ports surveyed constitute only 16.4, 41, and 22% of the national gillnet fleets in Ecuador, Peru, and Chile, respectively, so the numbers of turtle bycatch throughout these countries are likely to be significantly higher.

“People worry about industrial fisheries but a real concern that people are waking up to is small-scale fisheries,” said Professor Brendan Godley, of the Centre for Ecology and Conservation on the University of Exeter’s Penryn Campus in Cornwall.

“These are small vessels but they exist in such huge numbers that they can have a massive impact on ecosystems.”

Dr Joanna Alfaro, who obtained her PhD at Exeter and is now director of ProDelphinus, a conservation organisation in Peru, said: “This work highlights the importance and the benefits of our approach of engaging with fishers.

“We are actively working with fishers in this region to develop and implement solutions to bycatch – not just to improve the situation for turtles but for the health of fisheries and fish stocks.

“Our goal is to develop fisheries that are sustainable for small-scale fishing communities and the species with which they interact.”

Dr Jeffrey Mangel, also of the University of Exeter and ProDelphinus, added: “Gathering this survey data was a massive effort across three countries, and the results give us fascinating and important insights.

“We are careful not to overstate threats to wildlife, but in this case it’s clear that tens of thousands of turtles are being caught each year.”

The paper, published in the journal Fisheries Research, is entitled: “Untangling the impacts of nets in the southeastern Pacific: Rapid assessment of marine turtle bycatch to set conservation priorities in small-scale fisheries.”