Researchers at Harvard University’s Wyss Institute, John A. Paulson School of Engineering and Applied Sciences (SEAS), Radcliffe Institute for Advanced Study and Baruch College have developed a device that safely traps delicate sea creatures inside a folding polyhedral enclosure and lets them go without harm using a novel, origami-inspired design.

Research on marine organisms often involves capturing individuals to study them, however capturing delicate or gelatinous pelagic animals like jellyfish, squid, and octopuses without harming them has long been a challenge for scientists.

The newly developed RAD (rotary actuated dodecahedron), designed for midwater interaction, is an innovative device that uses rotary-actuated folding polyhedrons to quickly and safely capture marine organisms. It consists of five identical 3D-printed polymer “pedals” that are attached to a series of rotating joints that link together to form a scaffold. The structure rotates at its joints and folds up into a hollow dodecahedron when a single motor applies a torque at the petals meeting point. 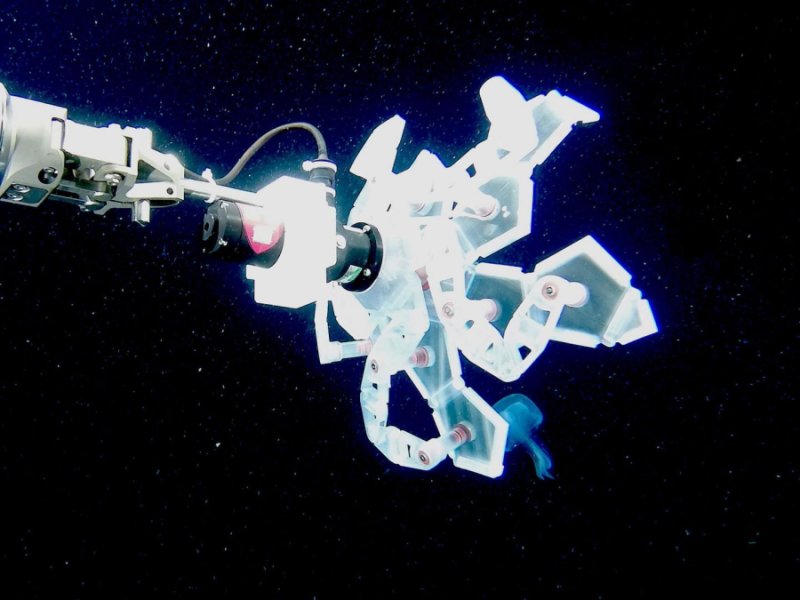 The rotary actuated dodecahedron (RAD) sampler has five origami-inspired “petals” arranged around a central point that fold up to safely capture marine organisms, like this jellyfish.
Credit: Wyss Institute at Harvard University

The RAD sampler design is perfect for the difficult and unpredictable deep ocean environment “because its controls are very simple, so there are fewer elements that can break. It’s also modular, so if something does break, we can simply replace that part and send the sampler back down into the water,” said Teoh. “This folding design is also well-suited to be used in space, which is similar to the deep ocean in that it’s a low-gravity, inhospitable environment that makes operating any device challenging.”

Eventually, the device’s creators hope the so-called Rotary Actuated Dodecahedron will help biologists identify new species in the open ocean and deep sea without ever bringing them to the surface. “There are literally thousands of species of gelatinous animals that remain undescribed in the deep sea simply because there is no good way to bring them to the surface intact,” Phillips said. The device was tested to 700 m, but the system was designed to withstand full ocean depth (11 km) pressures.

See below for a video of the newly developed device in action:

The researchers tested the RAD sampler at Mystic Aquarium and successfully collected and released moon jellyfish underwater. After making modifications to the sampler so it could withstand open ocean conditions, they then mounted it on an underwater remotely-operated vehicle provided by the Monterey Bay Aquarium Research Institute in California. It was tested in the ocean at depths of 1,600 to 2,300 feet using the vehicle’s manipulator arm and human-controlled joystick to operate the device. The team was able to capture soft organisms like squid and jellyfish within their natural habitats and release them without harm.

“We approach these animals as if they are works of art: would we cut pieces out of the Mona Lisa to study it? No — we’d use the most innovative tools available. These deep-sea organisms, some being thousands of years old, deserve to be treated with a similar gentleness when we’re interacting with them,” said Gruber who is also a 2017-2018 Radcliffe Fellow and National Geographic Explorer.

The research, co-authored by David Gruber, Presidential Professor of Biology and Environmental Science at the City University of New York’s Baruch College, is published in Science Robotics.